This article is by staff writer Kristin Wong.

Every now and then, I get an email from a fellow writer who’s just starting out and wondering where to begin. “How did you do it?” they ask. “How did you make freelance writing your career?”

It’s flattering, but what do I say? First of all, I’m still working to reach my own writing goals, so I’m not even sure I’d be the best person to ask. But also, any success that I may have had as a freelancer has at least a little to do with luck. True, it’s mostly hard work, but auspicious timing and lucky breaks have also helped my career along the way. 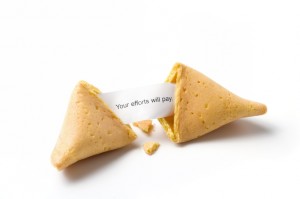 For example, when I started writing for MSN, it wasn’t because I worked hard to get their attention and relentlessly pursued their editors. It was also because I had an enormously talented and kind friend who landed a job there, and she happened to be hiring freelancers right as I decided to leave my job to become a freelance writer.

I’m not saying I wouldn’t have gotten that gig had I not worked hard. But it also helped that I knew someone whose department was hiring at the right time. As important a role as hard work plays in success, it’s also important to acknowledge good fortune. Here’s why.

Disregarding the role of coincidence can make you believe a certain behavior is effective when it really isn’t — or worse, that behavior can actually work against you. Carl Richards of The Behavior Gap called it “lucky fool syndrome.”

“What sets off the lucky fool syndrome? Psychologists call it the self-attribution bias. It means we’re inclined to take all the credit for things going well, but we have no problem blaming outside forces when things go wrong. On top of our bias, we have a very difficult time separating skill from luck. As a result, we’re susceptible to the lucky fool syndrome and the problems that come with it.”

Investing is a perfect example. Richards cites a 2013 study, Self-Attribution Bias in Consumer Financial Decision-Making. In it, researchers studied the impact that investment returns had on how people perceived their own skills. When returns were good, subjects credited their awesome investing skills. When the market sucked, as it sometimes does, investors blamed it on bad luck.

This sounds harmless enough. What’s wrong with a little innocent self-delusion? The problem is, it can lead to costly mistakes.

Take my own example of self-attribution bias. When I decided to try my hand at active trading, I had huge returns within the first few months. I convinced myself I had a natural talent for it. (Embarrassingly, I believe I referred to myself as an investing genius, only in my head, of course.) I deluded myself into thinking that somehow I was able to accurately calculate the future, even though the most skilled and experienced investors can’t time the market.

So I repeated the “skills” I thought I possessed that helped me get those returns. The result? I lost $400 — more than half of my earnings. I should have cashed out when I got lucky. Instead, I learned the hard way that discounting the role of luck can come at a cost.

There is another problem with self-attribution bias. It limits our empathy and understanding. We think that, because one method or formula for success worked for us, that must be the magic formula for everyone. We think we have all the answers, so we stop considering any other possible problems or solutions. And sometimes we actually offer terrible insight. This article I wrote a year ago is like the case in point:

“I’ve found that it usually helps, when asking for something, to remind people that you’re human. When arguing for a raise, I reminded my boss that my financial situation was suffering due to inflation…”

I cringe reading my own words. Readers totally called me out on this, and rightfully so. This is the exact opposite of what most experts agree you should do. But because it happened to work for me, I figured, without giving it much additional thought, that it would work for everyone. Sure, my own good diligence helped me nab that raise, but I think it’s a good example of how self-attribution bias can limit your understanding.

None of this is to say that hard work isn’t absolutely necessary. With most things, if you want to succeed, it takes a great deal of effort. Take my mom’s savings story. Despite being poor, she did whatever she could, sacrificing quite a bit just to save a few bucks a week. That’s the hard work.

But she acknowledges a few things out of her control actually worked in her favor: interest rates, overtime availability, and a part-time job opening. She told me:

“Not everyone sees overtime as lucky. Everybody gets lucky breaks, but it depends on you seeing it as a lucky break.”

Maybe the key to success is taking advantage of both — seizing those lucky breaks by being willing to do the work when they happen. Maybe it’s about recognizing the opportunities and taking advantage of them in the right way. Most of us aren’t lucky enough to make it on our good fortune alone. In fact, without effort, any luck that does come your way could easily be squandered. For example, if you are an over-spender, you might blow through a windfall. But if you’ve been working hard to get control of your finances, you may be more inclined to use that windfall to reach your financial goals.

Luck alone probably won’t get us far. But it seems that recognizing it can work in our favor. It helps us take advantage of those auspicious opportunities and, plus, it gives us a better understanding of our skills and exactly how our hard work pays off. It seems to me that understanding this balance is a little more realistic anyway.

Do you attribute your success to hard work or good fortune? Have you seen self-attribution bias backfire before? Have you changed how you view working hard versus being lucky?

Hello, I’m Rich Franklin. Money saving blogger and Dad of 2 kids. Learn how to save money and get rich by following my blog.

Published in ebook format on Amazon, by book teaches you some simple tips of how to make money in your sleep