This article is by staff writer Lisa Aberle.

While it wasn’t a dark and stormy night yet, an ice storm was coming. The last time we’d had an ice storm, we were kidless, and we lost power for five days. The romance of sleeping in front of the fireplace quickly cooled off along with the temperature in the house. If we lost power again, 39 degrees just wasn’t going to be acceptable with two kids.

That’s why my husband took a trip out to the shed to get our generator ready to combat a potential loss of power. 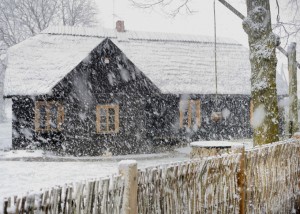 Except he couldn’t find the generator. After a few minutes of brainstorming (Did I put it somewhere else?), he called someone who frequently borrows our stuff.

“Your generator?” said The Borrower, “Yeah, when you were out of the country last year, I let somebody borrow it. I’ll give him a call.”

And then a few minutes later, The Borrower called back. “There is a small problem. He has the generator, and it works. But … he thinks it’s his. So best of luck to ya. ‘Bye.”

So my husband made a second phone call. Sure enough, the other guy thought the generator was his. But the strange thing was that he thought it had been his for years. This is an old friend of our family, so we decided to preserve the relationship and ignore the problem pf the questionable ownership of the generator. The ice storm didn’t materialize that time or any other time during the long winter. Crisis averted, relationship preserved.

But winter’s coming again. “We really need to have a generator before winter hits,” my husband said recently. He priced a new one. A new generator will set us back $700.

There are so many things wrong with the story I have shared. I feel stupid that we haven’t really addressed the issue, perplexed that this happened with someone we’ve known for years, and just plain annoyed that we don’t have a generator. And let’s not forget that we didn’t even lend it to someone in the first place. In fact, the only good thing about it is that it provides me with some blog article content because it inspired a question: Do “nice” people finish last financially?

My hand is raised.

When you’re too nice

I’m a recovering nice person. I actually try not to use “nice” when addressing any behaviors of my children. I don’t say, “Be nice to others” because it reminds me of a doormat who has issues with boundaries and other things. When you’re too nice, you may spend money you don’t have to help someone who may not even need your help. Instead, my word of choice is “kind” or “kindness.”

Differentiating between the two words has made a huge difference to me.

See, before, I wanted to help people. Maybe I tried to help them by giving them money, or buying something for them, or buying something from one of the home parties I hosted. Many times I spent more than I should have. And when I did that, I sometimes felt stressed. And when I felt stressed, I became resentful of the person I had wanted to help in the beginning. Doesn’t that sound messed up?

Can you be generous without being nice?

I still want to help people. But now I help them without any feelings of resentment (unless someone gives away our generator … sigh).

1. The first step is the most important. You must realize that you can make a huge difference by staying within your budget so you can give more to the things you really want to support. Does it really help someone if you buy a Pampered Chef gadget that you really didn’t want so they could get $5 more in free products to pick out? But if you don’t buy the $40 gadget, you’ll still have $40 instead of spending $40 on something you didn’t really want or need in the first place.

2. For myself, I keep running lists of things that I want. Maybe it’s a magazine subscription. When a niece or nephew send me information on a school fundraiser that includes magazines, I look at my list. If there is a magazine I want, I will order. If not, the information goes into the trash. Same with invites to home parties like Tupperware or Pampered Chef. If I haven’t been wanting to buy something, I just don’t go at all. I don’t feel a bit guilty or resentful.

3. I have found that consistent support of a handful of charities has been helpful. I know that if I spend budget dollars in other places, I won’t have enough to support the causes that I am really interested to support. That helps keep my focus on what’s really important to me.

4. Just say “no.” As I get older, I appreciate openness and honesty more than ever. My friends and family still love me, even when I say no to certain things that I don’t feel align with my spending values.

Be generous; just don’t be nice

I believe that being generous is important. I have experienced the generosity and kindness of others more times than I can count. So be generous!

But be generous because you want to be, not because you feel you have to be. If you feel resentful of someone else for something you chose to do, you probably are being too nice. And that should inspire you to look at yourself honestly and ask what needs to change.

Hello, I’m Rich Franklin. Money saving blogger and Dad of 2 kids. Learn how to save money and get rich by following my blog.

Published in ebook format on Amazon, by book teaches you some simple tips of how to make money in your sleep